Today is Father’s day in the UK, so I decided to ride down to Selsey on the Aprilia and reminisce about all the good times I had with the old man down there; and the rest of the family of course!

We were very lucky to have a holiday caravan down in Selsey from when I was born; we visited almost every weekend between March to October and all the holidays in between until I was about 15 years old.

My childhood generally involved running wild through fields with friends, festering in amusement arcades and having a swim in the sea each day; which is probably why I now find that I have a more spiritual connection with coastal areas than the suburbs of Surrey.  Selsey was more my home, I just went to school in Surrey and hibernated during the winter months until it was a time to chase the cows again and feed the horses.

A journey down to Selsey generally involved a process which I didn’t particularly like very much back in the day; the three of us would be crammed into the back of the car (Brian my brother, Lorraine my sister and I), along with god knows how much stuff on our laps.  Quilts/bags/other crap would then be stuffed in just about every conceivable space in the car; when making the trip down to begin our 6 week summer holiday from school, we also had to hold the budgie cage in the back as well!  I can still remember the bell on Bluey’s mirror jangling away the whole time.

In contrast to the plight endured on the backseat, Mum and Dad would be sat in the front, gabbing on about going out that night to their favourite club or throwing an immense cockney BBQ for a good hundred people; all the time puffing away happily on 40 or so ciggies in the hour that it took us to make the 70 mile journey. God I hated the stink of the fags; it’s a small wonder the budgie didn’t die of nicotine poisoning as well!?  Much like a miner canary following a gas leak.  Oooook!

This time however, I can honestly say it was a really lovely ride down there, what with all the open dual carriageways just passed Beare Green which gave me many opportunities to get the bike up to a good speed, soon enough I was passing through Chichester and eventually around the outskirts of Chichester lakes (where Brian and I used to nightfish occasionally) before heading down the final 7 mile of road which winds gracefully into Selsey.

I can remember being so excited about that stretch of road, it was something of a countdown because the signs would show just how long it would be before we got to shout “YAY!” going past the ‘Welcome to Selsey’ sign.   Yes, we really did shout “Yay!”.  Well, I did.  And I did this time as well!  You’re never too old….?

Driving into Selsey’s High Street I immediately noticed how things had changed slightly since my last visit a few years ago; a couple of supermarkets had sprung up on some old fields that I used to cut through, otherwise the charm of the place had definately been retained; especially the ‘Raycrafts’ shop which I used to visit each weekend to buy various WW2 airfix kits and paint.  I was suprised and warmed to see it was still there.

From the high street I drove down past Manhood School (named after the Manhood Peninsula, fnar fnar, Manhood!) and into the ‘White Horse’ section of Bunn Leisures Caravan Site.  The old clubhouse and bar that we used to go to each night had been enhanced somewhat by being built into a complex; also devoured was the outdoor swimming baths that I frequented every day (2 mins from the caravan) which had been filled in and made into a basketball court.  Offensive!  So, I buggered off.

It took all of 2 minutes to park up next to where our old caravan used to be; a new gleaming £30,000 replacement sat on the ‘D13’ plot instead, however I could still remember how ours used to be.  Vividly in fact.  I sat on the bike, transfixed whilst all the memories ran in my head.  Good memories, great in fact.  It was just the boost my soul needed.

After about 5-10 minutes I headed to ‘West Sands’, a 20-30 minute walk as a kid worked out to around 5 minutes on the bike at low speed.  ‘West Sands’ was always the cooler park due to the massive ‘Beachcomber amusement arcade’ up by the sea front; further down from there you also had the Windmill which had a permanent Funfair next to it which I had mixed memories about (I’d bitten through my lip on the dodgem’s after insisting I went on them as a nipper, I still can’t live that down).

It was here that I noticed how ultra-commercialised Selsey had gotten, a million quid complex including bowling alley now dwarfed the old Embassy club of old; don’t get me wrong, it looked all rather cool; however I miss the ‘Nab Tower Restaurant’ that I often got a slush puppy in after having kicked someone’s arse at Street Fighter 2.

My last visit in West Sands was to the site of the ‘Biscuit Club’, renamed ‘Windmill club’.  My parents loved going here; more so towards the last 5-7 years of our time down the caravan.  I can only describe it as the southern version of the Phoenix club.  Bingo, cabaret, bad stand up comedians, it was all here.

During the daytime Dad and I would often walk up next door to the ‘Captain Morgan’ pub which had 4 of the best snooker tables I’ve ever played on; and we’d lose hours in there trying to outdo each other.  Can’t ever remember beating the old man though.

I left the caravan park feeling slightly sombre, not because of the changes, nor because of Dad’s absence, but perhaps in reflection I wish my sibblings and mum were there to share the happy memories that my trip evoked.  Heading back into town I decided to go and have a healthy meal in the ‘Riviera Restaurant’; something of a Krishnan tradition on a Sunday where we’d scoff a huge meal before heading home.

The Riviera (or Rivy as known to the cockneys) was always bloody good value, and a place where I discovered my love for barely cooked veg (I can’t abide mushy veg, as cooked by Mum in the old days).  The decor back in the day was a really strange 1980’s facimile of a 1950’s American diner; the walls contained really strange pictures of clowns and neon signs glowed on the main counter.

I sat down in a vastly refurbished Rivy and immediately felt familiar with what they’d done; they had expanded the seating area by taking over the shop which used to be the laundrette, they’d really pushed the boat out; for Selsey anyway!

I ordered the monster fry up, as I do each Fathers Day in memory of my Dad’s love for a good English Breakfast.  As I began to tuck in I began to notice the huge queue of punters eyeing up the gorgeous looking carvery counter which was full of choice.  HUGE plates of food were being brought back to tables and for a split second I felt torn as to my choice.  I mused at that point it would be nice to go back on another occasion and have the carvery as well.  Yes, that would be perfect?

I daresay I’ll be going back in a couple of weeks to liberate some yorkshire puds.  Hasta la vista, Krishnan. 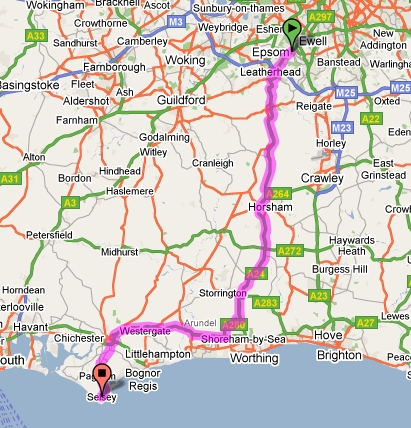 The Journey.
It’s easy enough from my neck of the woods. First things first, I headed into Sutton and through to Epsom, along to Leatherhead and down the A24 until Beare Green; this is a particularly cool bit of the journey because there’s so much open road. Then, follow the A29 all the way to Fontwell and take the A27 through to Chichester. Finally you take the B2145 for about 7 miles and you end up in Selsey.

5 thoughts on “Pilgrimage to Selsey Bill”