Another simple way to grow strawberries is using hanging baskets!  A bit of drilling, fix some fucking brackets to the wall and you’re off! 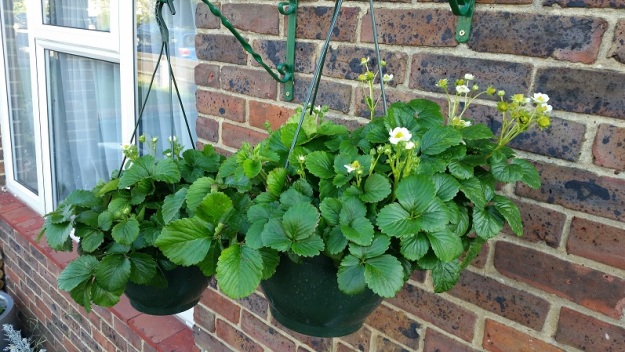 Strawberries are very thirsty wotsits so you have to water them a lot, but it’s amazing how quickly everything kicks off once they are established! 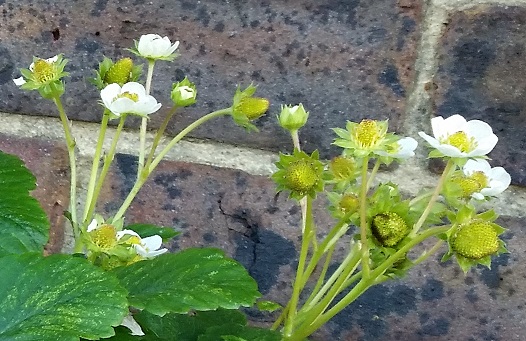 Hmmmmmm, I still feel too lathargic to write about my trip to NYC…..Oh, OK. I’ll do it. Blimey. Suffice to say that it was good, the weather was reasonably pleasant (aside from mid afternoon/evening fog, which is why we didn’t go up the Empire State or go on the Statue of Liberty tour) and I was genuinely shocked by how incredibly warm and friendly New Yorkers were! I feel slightly ashamed that I had created a stereotype over the years that the average New Yorker was rather brash and rude compared to the Midwestern Americans that I am more familiar with. I was wrong, and for that I apologise New Yorkers.

From the extremely polite and friendly ‘foreign’ cab drivers, to the Manchester United fan I found who owned a hot dog stand on Columbus Avenue (said chap gave me the biggest hug and had my pic taken with him when I told him I was a supporter); I can honestly say that I was genuinely humbled by the warm reception my sister and I got whilst visiting such a funky city. I use the term ‘foreign’ in very loose terms because I find it rather ironic that Americans can consider anyone else immigrants? But I digress.

My favourite place? Would definately have to be central park; I could only describe it as a veritable oasis within the maestrom of madness which makes up midtown Manhattan. Central Park was my only real ‘to-do’ list choice whilst I guided Lorraine around her shopping expedition, I really wanted to find the John Lennon Strawberry Fields memorial within the park in order to reflect upon a man whose life greatly inspired my own. So that was my first order of business on our first day there. The New York City ‘grid’ system is so easy to follow, and we quickly found the memorial site; Strawberry Fields is just a little area within the park with benches all centered around an ‘Imagine’ floor mosaic. I sat there for a sometime and enjoyed the surroundings, and I can only describe it as utterly serene place to go. Spookily so.

The park itself is bustling with joggers (clearly people who regularly exercise), TONS of very well trained dogs and their owners who apparently go to eventually congregate in a corner of the park which offers obedience lessons on a Saturday morning. Central Park also has the most incredible varied wild collection of birds I think I’ve ever seen within a city; their collective singing and chirping totally drowned out everything outside the green boundaries.

The hotel we stayed at was funky too. I was lucky enough to get a good deal through Expedia and stayed at the Hilton on 6th Avenue, it’s situated right next to the park and is ideal if anyone wants to experience a slightly alternative journey through the park it into the outskirts of Harlem like we did; I will definately be spending more time there during my next visit for sure. Harlem had such character with it’s old town architecture. The smell of soul food tempted me but alas we didn’t have time, Harlem definately had such a vibe about it though!

After a visit to the UGG store on Columbus Ave we refuelled at a Deli nearby (you HAVE to visit a deli and experience a turkey and bacon club sandwich!) and after that, eventually toodled up to 150W 54th street which is where you can visit Macy’s; the biggest store in the world (A whole city block and 9 floors!!!!) We went back 3 times because it had so many bargains. I also bought my bike jacket across the street so I’d definately recommend any visitor to NYC to pop in for a mooch. Top tip for tourists visiting Macy’s, pop upstairs for an 11% off coupon!

Keeping with the inner city theme we also popped to Times Square which was phenomenal. Bright lights, lots of noise and how could I forget the exceptionally offensive ‘M&M world’ stuffed in the corner. It is all perhaps too much visual and audio stimulation for one person; but it’s an experience I don’t think you should pass up if you want to see capitalism personfied. I thought it particularly intriguing that the HUGE Virgin Megastore on Times Square closed down for good on the day that we visited, it was really bizarre to see it all gutted out with even the shop fixings up for sale to the highest bidder.

It was with sadness that we checked out of the Hilton on Sunday to get a ride to the Holiday Inn over by Newark airport. The Hilton had such a gorgeous room but I decided it would be best to do this so as to avoid the 60 minute journey before our flight if had instead stayed downtown in Manhattan and gone to the airport from there instead. I didn’t want to take the chance with the city traffic, and when I say traffic, I fucking mean it. It’s HEAVY. That Sunday night a powerful storm swept America and lots of airlines suffered cancellations, we did make it home just fine the following day; however I am not sure how the journey would have been had we not stayed close to the aiport. It was meant to be!

So NYC gets a huge thumbs up from me. Obviously anyone in the UK should ideally wait for a better exchange rate before going over, once you do you’ll be spoilt for things to do and bargains to be had!!!!!