Fucking yes!  I was lucky enough to get hold of a Japanese copy of Street Fighter 4 which is due out in the UK on the 20th February 2009; suffice to say that I am extremely chuffed.  Oh yes.

My love affair with the Street Fighter series goes back right to my Commodore 64 days with the first game which was nigh on impossible to beat, and then Street Fighter 2 which I became totally obsessed with at around 11 years old thanks to the MASSIVE arcade cabinets down in Selsey Bill.  As my parents threw wild BBQ’s for hundreds of cockneys, I smashed the utter shit out of whoever I could at SF2 (It still makes me cringe to think how determined I was to totally decimate a really mouthy Korean kid in an arcade located in Kansas, he was about 11 and I was 20.  Still beat him like a punk bitch).  As you can see, it brings out the competitive streak in me.

Oh how I remember bunking off of school and going up into the prototype arcade machine halls in Warren Street, London with a friend of mine and living on the edge.  “Hey mate, you got 50p?”.  “No, fuck off!”.  How I avoided getting stabbed by the usual scum that lurk around arcades I’l never know?  You could say that It was fate that I survived and mastered my Dragon Punch technique.  Sho-Ryu-Ken-Slag!

The much maligned third game was also a favourite of mine on the Sega Dreamcast (my favourite console of all time), it was pretty innovative with the parry and blocking system  and I’m glad to see so much of it’s influence went into the guts of Street Fighter 4.  I honestly never thought Capcom would make the game to be honest; and certainly not with the sheer class and utterly fantastic gameplay that they have relaunched the franchise with.

So how does it play?  It’s amazingly fluid, responsive, technical to a degree I’ve never experienced in a fighting game before and has such a familiar feel to it that you’d be forgiven for thinking it was the good old days again.  That is to say that it’s the first time i’ve probably grinned to the point my face hurts whilst playing a game (Resident Evil 5 came close…but) for at least a decade.  The designers seem to have also rolled back the years with the design of the characters and overall look, the animation is phenomenal and I love the manga look of the game.  Very lush.

I played the game on the ‘medium’ difficulty setting and quickly settled in playing with Ken, my chosen character.  Here’s a snippet of me beating up the Mexican Wrestler El Fuerte one handed, the other was holding the camera I assure you 🙂

ONE HANDED FUN ON A WEDNESDAY NIGHT

There are the usual power bars, revenge bars, SUPER bars, all of which allow you to trigger nasty counter moves and special attacks; usually followed with some funky animation.  As mentioned earlier the parry and block system responds instinctively, you won’t just be able to bash buttons and beat someone with your eyes closed on this game that’s for sure.  Overall, I’d have to say it’s the best fighting game I’ve ever played and that’s by a long way.  I can’t wait to try it out over the xbox live servers!

It wasn’t all plain sailing though I must admit.  I struggled a little against Guile with his flat top haircut and poxy Sonic Boom attacks, Sagat was an utter tosspot as usual with Tiger Uppercuts flailing all over the place, and when I finally reached the Boss character Seth, he spanked me all over the place which was great fun!  I was lucky enough to perfect him in the first round, he then regenerates and starts teleporting over the screen kicking ten bells out of you; probably why he’s the boss character?

I really loved his design though (he has a spinning ying/yang in his midrift), he reminded me so much of Street Fighter 3’s boss, Gill, and also the character Urien from that game too.  The SUPER move that Seth performs on you involves sucking you into his ying/yang, you going around like a washing machine and then spat out at speed right up onto the screen face first – see pic in the gallery).

The end fight was such a struggle that I couldn’t help but take some video as I completed the game; I was then greeted with the longest offensive list of credits you’ve probably ever seen (along with me sticking my fingers up at a couple of characters that pop up, and also a bit of obscene gesturing to the female characters).  So yes, I finished it.  Woohooo!!!

So, if you see me on xbox live, bring it on bitches! 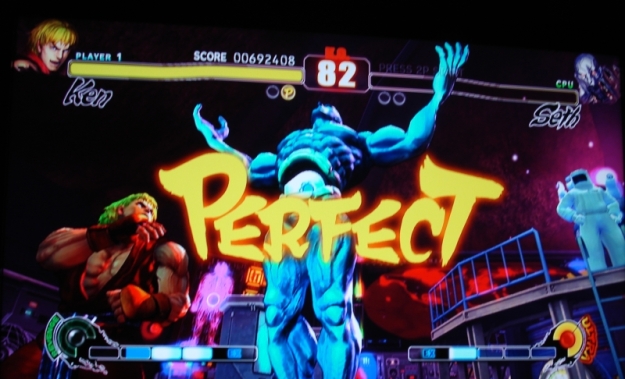