Chico turned 8 months old this week, the last 4 weeks or so saw quite an adult change in his behaviour.

Cheeks had been showing increasing signs of sexual dominance and was slightly more  aggressive than he had been; he’s normally has a very playful and affectionate temperament contrary to what you’d expect of a Parsons Terrier (Jack Russell Cross).

I called up the RSPCA centre that he was registered to and asked if they could re-assess their ‘unique’ personal policy of not castrating him until he was a year old; they stuck firm to this which lead me to seek out a new vets.  I am lucky to have a friend who is a vetinary nurse and her opinion was that this was 6 months too late, the internet also offered me a good deal of advice.

Ray recommend his local vets, and we booked him in for Thursday this week.  I felt tremendously guilty making such a prolific decision in his life, however I mused that I would rather do that and ‘calm’ him down than see him bite someone.  There is also the huge factor that castration prevents testicular cancer.

The vets carried out the operation and also removed two baby canine teeth that were also giving him a little trouble  which went some way to explain the slight increase in aggression and Chico’s need to gnaw almost constantly on his chewy toys.

I arrived home from the darts around Midnight to find mums door closed, felt it best not to disturb him because she had text me throughout the evening giving an account of how distressed he was with the lampshade contraption around his head.

Around 4:30am – 5am I was woken up by him, Mum said he had been crying and scratching at my door; so in he came, got up on my bed and practically pleaded with me to remove the lampshade.  So I did.  It turned out to be a good decision because he hasn’t licked or bitten any of the area that he shouldn’t.

I won’t ever forget how he squashed himself into me after I’d taken the lampshade off; shaking with relief and utterly happy.  The last few days have shown an almost immediate return to his normal character, a little more sleepy and sluggish perhaps but definitely on the mend. 🙂

So he now has a new vets, I also got a Tesco ‘Pet Plan’ for him to make sure he always gets the care he deserves. 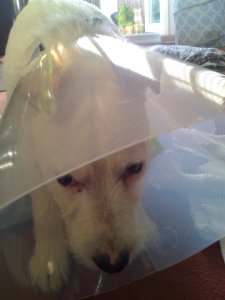 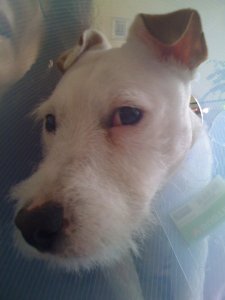 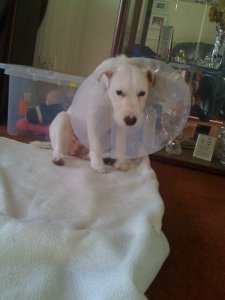