Chico had a visit to the vets yesterday because of a sore eye; we’d tried bathing his eye over the last few days but felt it was best he went for a check because it wasn’t clearing up.

It’s awful seeing an animal behaving differently due to an ailment or discomfort; over the past few days Chico would rub his eye using a paw and rest his face against me, pretty much asking me to bathe his eye.

Mum gave me a run down of his time at the vets; apparently he caused utter mayhem.

Those who have met Cheeks will know how he gets exceptionally excited to meet people and other dogs; wimpering and scampering to say hello.

Its a good thing Mum took him. Turns out he had conjunctivitis in his sore eye; the yellow dye put in by the vet showed no damage and the problem was probably caused by dust from DIY or dirt outside.

Poor little guy has eye drops for that, ear drops for a mild ear infection, worming tablets and flea treatment.

Given all the medication he’s taking; I might have to rename him Charlie Sheen?!?

As you can see from the picture below, he was very comfy laying on my legs as is often his custom; no comments about my funky candy cane PJ bottoms!!!

As of this morning, his eye is already clearing up nicely, he was running around the front room with his tennis ball like a loon and tried to bite my bike gloves on the way out!

Definitely back to his normal self 🙂 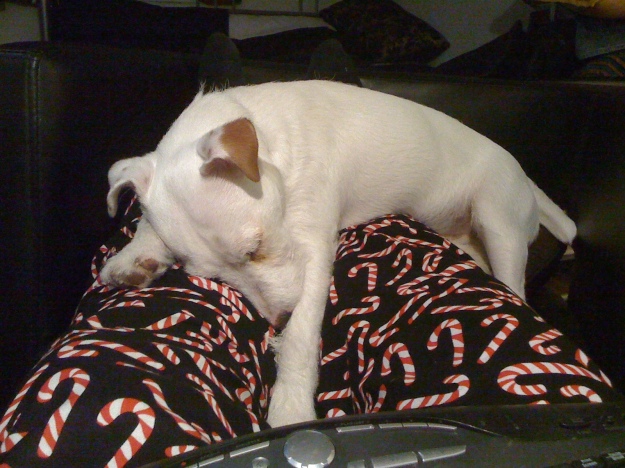