I could not get 5 consecutive nights at the Fairmont due to availability, so I arranged to stay at the Four Seasons hotel in Georgetown for two nights before heading back to the UK.

Upon getting out of the taxi, I noticed how the place dripped in pretentious luxury; being in places like the Four Seasons is slightly uncomfortable for me because I did not feel like I belonged here at all? The valet guys are wonderful and genuine in their welcome , but the reception staff are trying so hard to be 5 star that it feels like you’re in a Hollywood movie?

That’s not to be dismissive of their excellent service, I just felt it was a little robotic?

The lobby is amazing, a roaring fireplace and sitting area is right by the revolving door, just before the reception.  The reception staff looked after me so well, took my baggage (still not comfortable with someone doing that) and had it delivered to the room.

The journey to my room felt like it took ages because of how big this hotel is?  Perhaps they could benefit from adding some of the Heathrow pod parking vehicles to take guests from reception to their rooms?

The room is definitely more classy than the Fairmont, but the rooms are slightly smaller?  That said, it’s immediately apparent that you are in a different class of hotel here.  The bed is beautiful, the chairs are extremely comfortable and the TV was almost twice the size of the last one! 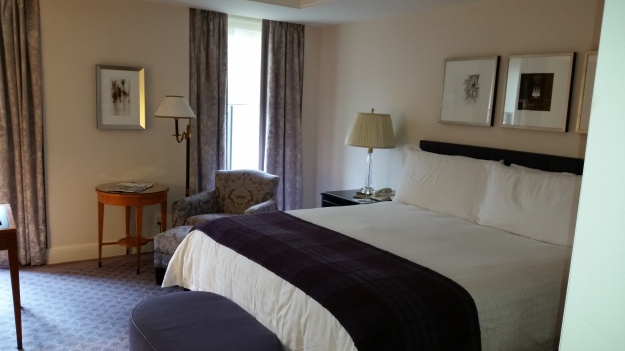 The bathroom had a HUGE shower (but no bath) and beautiful sink and countertop with a fantastic selection of toiletries. 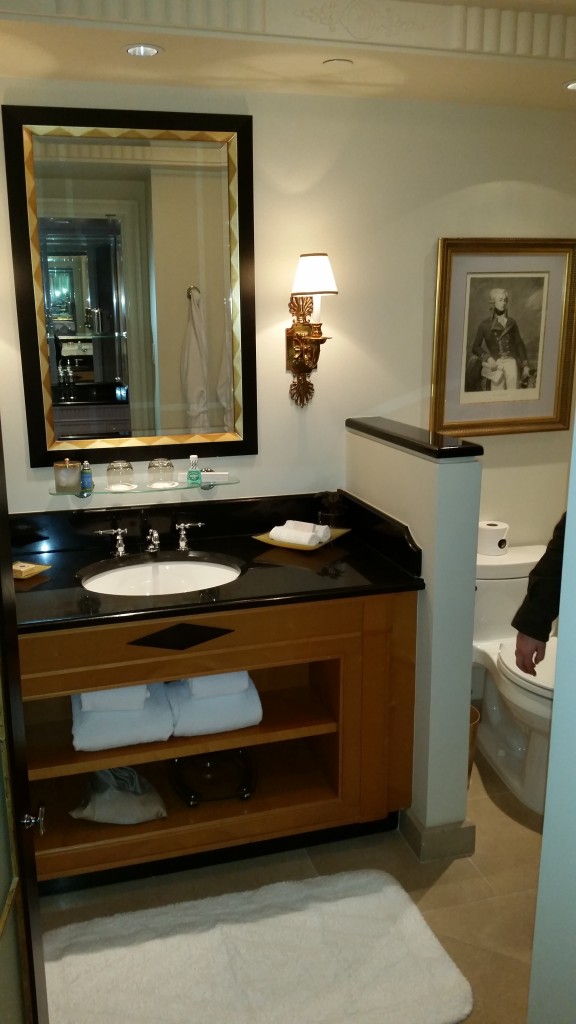 For a single night, I’d recommend a stay at the Four Seasons because it is absolutely amazing and I would not like to get too used to this kind of lifestyle, so that it remains a treat?  It was exceptional, but perhaps I was punching a little bit above my weight?

I had the pleasure of staying in the Fairmont hotel in Washington D.C. for three nights between the 11th to 13th of December.

Upon my arrival in a taxi from Dulles airport, I was greeted (very genuinely) by some very cool valet dudes and made my way through the stunning lobby to check in. Again, all very professional.

The lobby is beautiful with a centrepiece Christmas tree right next to the bar; just at the back of the lobby area is a concept fireplace (lots of photo opportunities to be had) and plush armchairs are littered about which make for a nice place to sit and plan out your days in D.C. 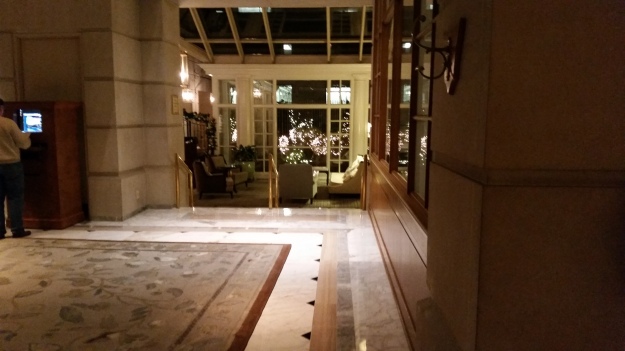 I had a really nice cheeseboard with a beer one evening whilst watching some American football and the prices are very reasonable.

There’s also a gorgeous courtyard full of trees and plants which are currently covered in Christmas lights for the festive season; animal statues made up of wireframe Christmas lights are on show here, their heads move with little motors which was a nice touch. Perfect for when you are totally fuzzed following a transatlantic flight and just want to watch some pretty lights. 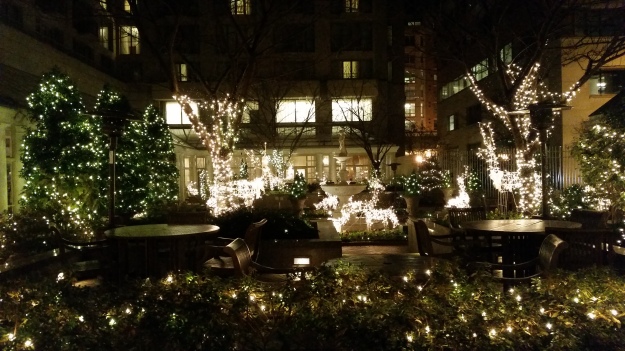 The rooms at the Fairmont are big and are generously furnished along with a very, very comfortable bed. The bathroom I had contained a nice sized bath with shower next to a really big sink and counter, massive mirror for a shave (if you are so inclined!). 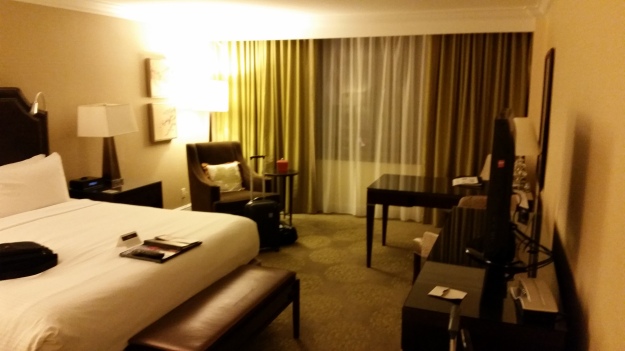 As you’d expect for a luxury hotel, the TV is bloody massive and has lots of channels to enjoy after trudging around the Capital. I watched the United vs Liverpool game, up yours you Scouse slags!

What makes the Fairmont stand out, is it’s concierge team, particularly a chap named Chris, for whom nothing is too much trouble in going above and beyond the call of duty for people staying at the hotel. Chris provided us with a reservation at nearby Clydes restaurant in Georgetown (excellent) and provided me with a handy ‘family’ discount at Macy along with general advice about the metro. Huge thanks to him for that.

Heathrow Business Pod Parking in Terminal 5 is rather swish!

The pods are futuristic looking contraptions which are about double the size of a smart car and reminded me of something out of Blade Runner or Total Recall (The Johnny cab!). 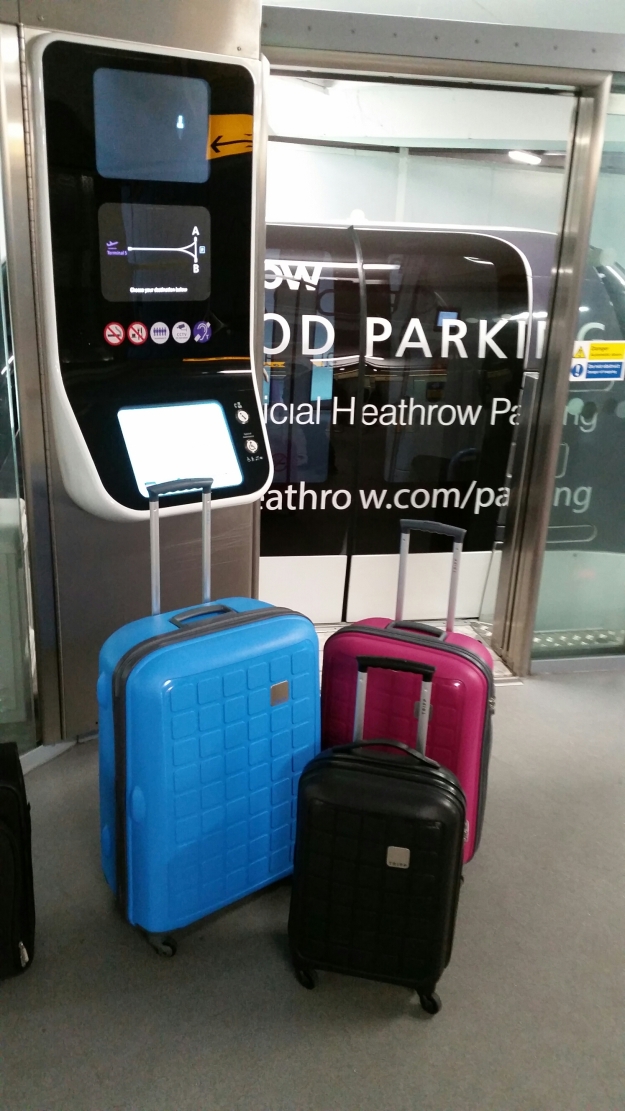 After parking up in a standard airport car park (conveniently situated just off the motorway), you head to a pod station and programme a simple journey to the terminal on a touchscreen monitor.

The doors open, you get in and after selecting ‘start’ on a button, off you go!

It’s about a 3-5 minute ride from the pod station to the terminal, you go over the lake using a skyway; the ride is quite nippy and it’s almost like being on a rollercoaster!  Almost.

During the journey, you have a little information video telling you where to go, nice and professional.

A weeks pod parking was about £90, which isn’t too bad when you consider the other parking companies operating at London airports are alleged to park your car in nearby streets or probably go joy riding in them!

It’s a fun experience to start your journey off and certainly a very easy way to get to your car after you arrive back to Heathrow.

The caravan and camping club site at Milton Keynes has a new en-suite camping den; I tried it out a couple of weekends ago!

The en-suite den is different to the other unfurnished glamping dens located on this club site:

The en-suite den is a fun getaway for two people sharing a weekend together; I think you’d get cabin fever if you spent more than 4 nights here as a couple, let alone a family of four!!!

Although the space is a little tight (if you’re a grizzly bear like me), the sofa bed is very comfortable indeed; I am 6’4″ and I had just the right amount of room to stretch out my legs when laying down. 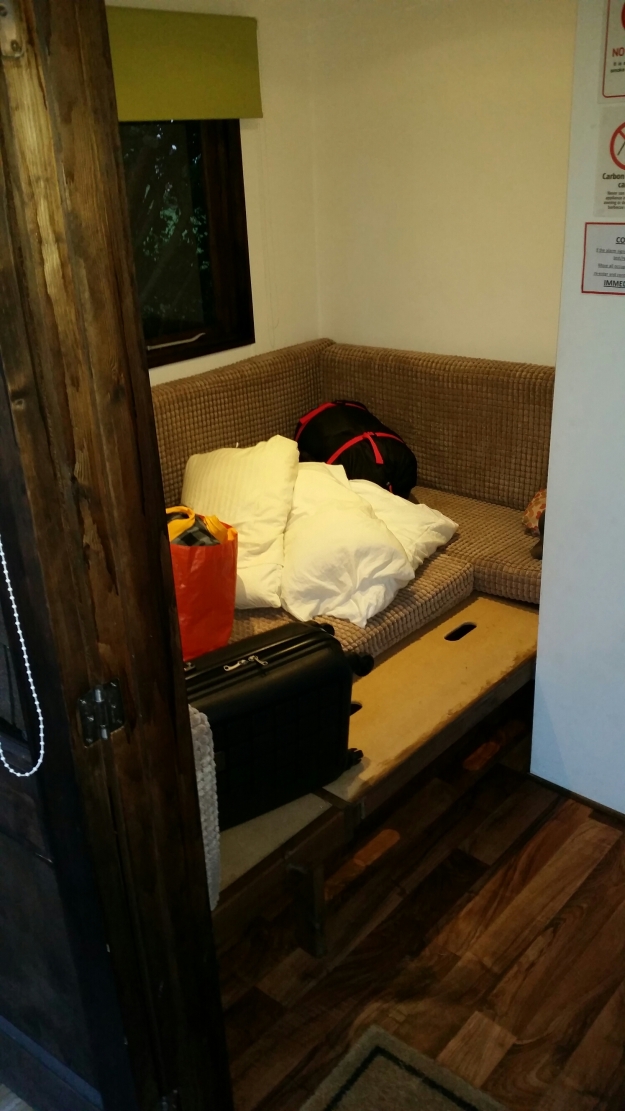 I didn’t risk the bunk beds because I had visions of plummeting through the top bunk into the bottom one or waking up with claustrophobia; the bunk beds are partially enclosed and look like torpedo tubes on a submarine.  Kids will love them though.

The wash basin is directly under the microwave and you will need to take care not to bang your head when you brush your teeth.  Bit daft that?

My advice would be to take advantage of the en-suite loo, but use the main shower block instead of the shower.

There are various mains supply sockets throughout the den along with mains lighting.

Don’t let my tongue in cheek comments put you off!!

With access to Milton Keynes central , Bletchley and Bicester, the en-suite den is great value for money; after all, it’s not much more per night than a standard pitch cost for a tent with electric hookup.

Below is the standard den if you want to compare.

The standard den is a bit like Arthur Fowler’s allotment shed?

Abinger Hammer is a lovely town situated on the A25 near Guildford in Surrey; it was my first time back for 30 years.

My godparents often brought me here to sit in the Tilling Bourne river and watch the cricket; the stream divides the village green from the cricket club and this beautiful corner of England is absolutely the reason why I am so fond of the sport.

Abinger Hammer is a time capsule in every way that I remember it.

The village green Post Office still sells fishing nets for the kids to catch sticklebacks, the clockwork blacksmith still hammers on his anvil to ring in the hour; still makes me grin!!!! 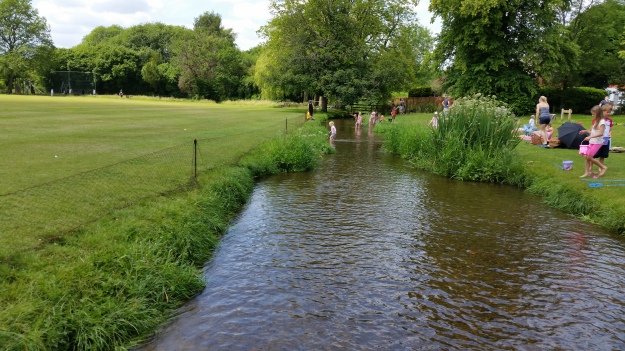 I quite admire nudists; not quite sure I’ll ever become so enlightened/nonchalant/comfortable about my body that I’ll willingly display my tackle to strangers (apart from the occasional bit of flashing down my local park).

It seems a very natural pursuit doesn’t it?  Nudism?  Whip off your clothes, walk along with your soul mate, let it all hang out and leave the clothed beach goers to question why they are ones who are covered up?

For a moment, in the 30oC heat, I actually considered that I would be more happy in the buff; the nude types happily strolled along the beautiful white sandy beach without a care in the world.

It was just a moment……

For the sake of humanity, I won’t describe what the trademark Fuerteventuran breeze did to 65 year old Bavarian pancake tit nipples!!!

One thing I DID notice, was that the majority of beach nudists were NOT strolling in the surf or skinny dipping as you’d expect; instead, they are doing the most odd things imaginable.

One over-tanned German wrinkly was digging a trench in the sand with a shovel (a garden shovel!!  Not a novelty bucket and spade effort); it almost seemed like he’d dehydrated, drank his own urine and gone stark raving mad, rather than just starkers?

A couple indulged their naked tennis fetish (clearly for naked bit wobbling exhibitionism) whilst another man flew a kite?!?

Then there was the naked rambler who power walked along with his partner; he was outfitted with a backpack and a kind of customised t-shirt on his shoulders but not a stitch elsewhere!  Not sure that will catch on with the execs back in Croydon?

As for nude swimming, the prize for the most amusing specimen went to a particularly butch German woman (I use the term woman very loosely) who was deliriously jumping around in the waves like she’d smoked Crystal meth.

It was like seeing a hairless albino gorilla do a spazzy dance every time ‘her’ skin came into contact with the cold sea water?  Some kind of imaginary water shot putting perhaps?

It’s amazing how quickly you can become comfortable around naked people though?

It probably explained how Hans, Klaus and Fritz were all able to sit together and put the World to rights in deep conversation; clearly not minding that their tanned tadgers were in view the entire time?

Perhaps then, it was only fitting that I arrived to the hotel dining hall upon my return from the beach, to find that today’s regional choice was barbecued German sausage?

Just don’t make eye contact whilst you eat one?   It’s the wurst thing you can do!!!

I was fortunate to stay at the Westcord Fashion Hotel on Monday; my job took me overseas to Amsterdam and I was very thankful to enjoy everything the hotel had to offer after a snowy commute to the Netherlands.

The hotel is situated within the A10 ring road of Amsterdam; I found it perfectly placed in Leidseplein which is a 10 minute tram ride from the city centre and the same distance to Schiphol Airport or Amsterdam RAI

The arty hotel decor wouldn’t look out of place on an episode of ‘Eurotrash’; especially the toilet doors by the Bar which require you to push a bum/back sculpture on the door,  rather than a handle!

I really liked my room,  big comfy bed,  en suite bathroom with a sliding glass door along with the biggest bath I’ve been in for some time; overall the rooms are excellent value with great facilities,  gadgets and free WIFI Internet.

The bar food was reasonably priced and value for money,  the breakfast buffet was excellent.

Sadly, I didn’t get a chance to visit the Wellness Garden and its two sauna’s, Turkish steam room, indoor swimming pool.  The pool looked great!

I’d recommend the hotel for a romantic break more than a business trip; purely because the bath is definitely made for two!

Regardless. A very enjoyable stay!

The Antikrish
Blog at WordPress.com.